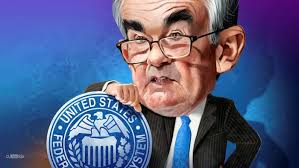 Tapering is the step taken by the FED to normalise monetary policy from the highly simulative policy. Tapering refers to policies that modify traditional central bank activities. Tapering efforts are aimed at interest rates, and controlling investor perceptions of the future direction of the interest rates. Tapering efforts may include changing the discount rate or reserve requirements.

Quantitative easing is a form of unconventional monetary policies, in which a central bank purchases longer term securities in order to increase the money supply and encourage lending and investments. Buying these securities adds new money to the economy, also serving lower interest rates by bidding up fixed income securities. This also expands the central bank’s balance sheet.

In response to the financial crisis, due to the rapidly deteriorating economic and financial conditions, the FOMC pushed the federal fund rate close to zero (the federal funds rate is the interest rate that banks charge each other to borrow or lend excess reserves overnight). As conditions worsened the FED tried to bolster financial market conditions through large scale asset purchases, in the hundreds of billions of dollar ranges – for example mortgage backed securities and Treasury securities. This is known as quantitative easing.

QE affects the economy through changes in interest rates on long term Treasury securities and other financial instruments – including corporate bonds. To impact the interest rates, QE requires large scale asset purchases. When the FED makes such purchases, for example on Treasury Securities, the result is an increase demand from those securities – in turn raising their prices.

Critics of QE warn that because of QE increases in the monetary base, significant dramatic inflation could result. Banks currently own a large number of reserves, which constitute the largest component of the monetary base. If banks were to loan these reserves, they would effectively increase the money supply. If the money supply grows at a rapid rate, the resulting increase in economic activity could cause inflation to accelerate.

The FED counters this by stating: incentivisation for banks to retain reserves, will prevent such an outcome. For example, the FED pays banks interest on reserves at the FED banks. If interest rates on these reserves are higher than the return the bank could receive from another investment, the reserves will remain idle.

Public expectations of the future inflation is also critical. Public trust that the increase in the monetary bae of QE creates is only temporary, then they will not expect rapid inflation in the near future. These expectations influence actual pricing behaviour, and in turn actual inflation.