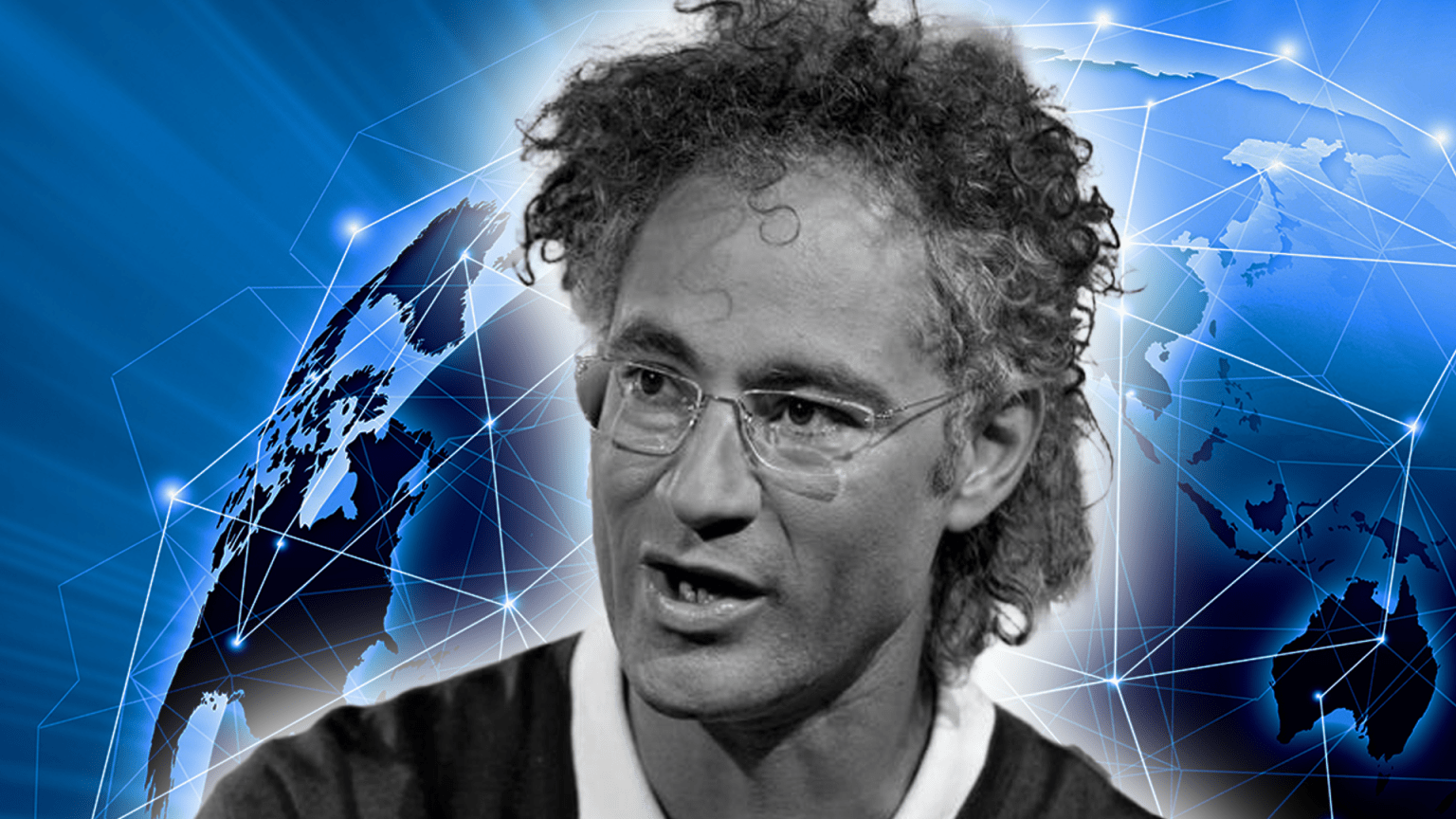 Why Edge AI & Sky Compute Will Allow Palantir To Become A $1T Company.

The truth is, Palantir is not just an OS. Palantir is the foundational software solution for businesses within the next industrial revolution. Within this report, there will be a deep dive into the convergence of technologies, the future of Industry 4.0, and an understanding of Palantir Sky & Edge AI Compute laid out.

ARK Invests, Bret Winton has stated within a recent interview that ARK have noticed within recent times the convergence of technologies appearing. An example of this is within the genome sequencing space in which often there is an overlap with AI technologies. Furthermore, Bret expressed his optimism in regards to the blockchain, and how the majority of companies now have a plan in place when it comes to NFTs & potential future adoption.

ARK Invest believes that the convergence of technologies is where the most exciting innovations occur, and interestingly there is often misunderstandings when technologies over-lap one another.

Bret said how, there is the possibility for S-Curves to overlap on-top of an existing S-Curve – therefore resulting in exponential growth curves in conjunction.

Interestingly, individuals are often mistaking volatility for risk said Bret. ARK, within a contrarian manner, state how volatility should be described as uncertainty, and therefore it is much better to take a longer term view when investing within innovation.

Bret, the director of research at ARK Invest, states how within the AI space alone, this will yield an expected market capitalisation of $100T by 2030. Cloud computing & Sky compute will become the leading IaaS layer in which gives access to a “supercomputer within a pocket.” Interestingly, in response to AI demand, there will be a meaningful increase in compute hardware spent, ARK predict.

Artificial intelligence will not be considered AI, however instead will be referred to as augmented intelligence, in which every software engineer will become more productive, instead of solely replaced. The productivity value of AI, will majorly exceed the overall revenue AI companies will capture, Bret proclaimed.

The convergence of technologies shows how the chaos associated with the data scene is just getting started. In reality, once these technologies work in conjunction more evidently, there will be an unprecedented level of disorganisation in which companies today are not prepared for.

Per the commentary of Bret from ARK Invest, within the AI space alone, there is an expected market capitalisation of over $100T by 2030. Cloud & sky computing will lead in this field as a IaaS model, in which gives access to supercomputer abilities.

Palantir is a company whom are currently making this notion of sky compute a reality, via their product offering of Apollo. Infrastructure as a service, refers to a cloud computing service in which offers compute, storage, and networking resources on demand.

Apollo is a platform for software management at scale, across all heterogeneous environments. In other words, Apollo enables one to seamlessly manage and continuously deploy software where the business needs it.

Apollo can enable new market opportunities within the context of AI:

When looking at Sky Compute, this potentially is one of the most vital initiatives for Palantir Apollo. Often, a single cloud solution is not enough. Sometimes, the whole sky is necessary in order to create a federated cloud.

The aim with Sky Compute is to create a large scale infrastructure using resources from multiple cloud providers – developing a way to join several cloud infrastructures together into one massive cloud.

Whilst the current conventional model of cloud computing has transformed IT, there are still many areas in which cloud computing falls short. Cloud computing, for example, is a fragmented market, with the top three cloud providers – AWS, Azure, and Google Cloud Platform gaining around 61% of the total cloud computing revenue.

Importantly to note however, the different cloud platform providers use their own programming interfaces, their own software services, and often even their own hardware. Furthermore, fragmentation is catalysed further because, once data is stored into a cloud providers, it can become very expensive and difficult to move this data out.

The main notion of sky compute boils down to the current inability to combine the best-of-breed hardware and software solutions in conjunction. If one individual wants to use solutions from AWS solutions, whilst being based on Google Cloud – then this incompatibility can slow innovation down massively.

Society is moving into a new paradigm, namely the ideology of Industry 4.0. Industry 4.0 refers to the deployment of a large amount of sensors, and actuator devices forming an Industrial Internet Of Things.

In accordance with an array of reports, the Edge AI Computing market is no trivial feat, and instead presents a $59.63B market size projection by 2030. This is mainly driven by the necessity to overcome cloud computing challenges based on the rise in demand for real time operations at the edge.

Both edge and cloud computing are meant to do the same thing – namely process data and run algorithms. However, the main difference between the two is where the actual computing takes place. Within the context of edge computing, information processing occurs on IoT devices that are on the field or in active deployment (at the edge).

However, within cloud computing, the same information processing occurs within a centralised location – for example a data centre.

Historically, cloud compute has dominated the IoT scene, because there are data centres that naturally have greater computing capabilities. Previously IoT devices on the edge could only transmit data.

Whilst cloud compute is still important, edge compute has become more popular due to an array of reasons:

There are some simplistic benefits of Edge AI:

Firstly, the reduced latency that is apparent. Devices no longer need to transmit data to and from a cloud. If, for example there is a device at the edge based within a manufacturing plant, and this device has innate AI capabilities in which can predict when a part of the manufacturing plant will breakdown, or stop functioning properly. If one were to use cloud computing to process this information, there would be a longer delay time in terms of information getting from the device to a centralised cloud. This is in comparison to Edge AI, in which can response immediately, and within the case of the manufacturing plant – will be able to instantly shut down the device that is not functioning in order to ensure no further issues occur.

Within the case of a manufacturing plant – the necessity for limited latency is vital!

Secondly, reduced bandwidth requirements and therefore reduced costs. Evidently, with less data being transmitted to and from a centralised cloud back to a device on the edge, this results in a lower requirement and thus cost in network bandwidth.

If we multiple thousands of devices within the IoT, in which constantly need to send data back and forth to a centralised cloud, evidently this can increase costs via higher bandwidth necessities.

Other major benefits include, improved reliability, as well as enhanced security features.

Within the context of manufacturing, businesses can embed Palantir Edge AI on sensors and cameras in manufacturing plants — as well as on machines in processing factories — to increase efficiency and improve quality control. When these sensors examine components as part of a production line, models deployed with Palantir Edge AI identify defective products and separate them for inspection or repair.

Interestingly, when looking at autonomous navigation, there is also a major benefit that Palantir can bring: “for autonomous vehicles, algorithms deployed on vehicle sensors with Palantir Edge AI detect potential obstacles in the path of the moving vehicle, and command the control system to avoid or mitigate collision.”

Whilst the market size currently for the IoT is still in inception phases, there is a projected increases within market valuation to reach upwards of USD 2,465.26B by 2029. This is upwards of the market size within 2021 – of 384.70B. As society shifts towards this new paradigm of Industry 4.0, in which physical objects have interconnectivity, the necessity for an OS could not be more over-emphasised.

Per the words of Bret Winton, from ARK Invest, the AI space alone has an expected market capitalisation of $100T by 2030. This will be driven mainly by Cloud & Sky Compute IaaS. Palantir, seem to be addressing this issue head on – via their product offering Apollo.