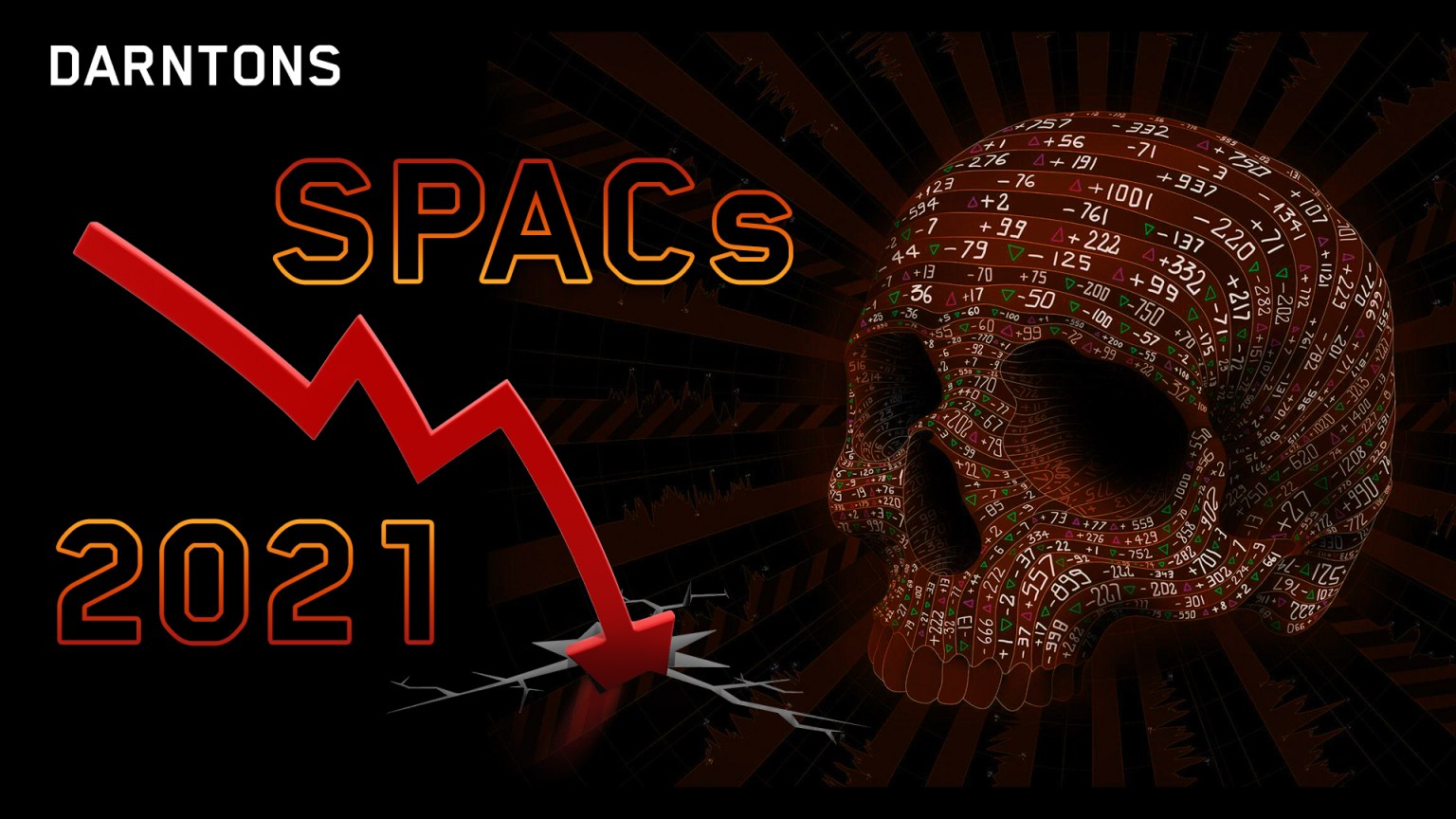 Both 2020 and 2021 were the years of excess given all the extra liquidity that suddenly circulated through the veins of both Public and Private markets. This unique environment gave birth to an unprecedented amount of both IPOs and SPACs. The amount of SPACs in 2021 was a staggering 613 while the IPO number went all the way to 420. That was more than double what 2020 brought, which was already double compared to the year 2019.

Looking back at the companies that are now crushed compared to the valuations they enjoyed this time last year it is easy to discard them, however, the smart investor knows that there are diamonds in the mud. And now it might be a wonderful time to revisit some of the stories and take a deeper look at what caused the mania as well as if now could be a good time to double down selected few from the 2021 SPAC cohort.

IPO is short for initial public offering, a transformation of a company from a Private enterprise into a Public one. Going public. A big step for any company and a liquidity event for insiders. New shares are also almost always issued to collect more capital that is often used to fuel further growth. Becoming a public company is usually the last phase of a cycle.

The alternative route to going public through the traditional IPO process is a SPAC merger. SPAC itself is a publicly-traded company that serves as a shell. Essentially a one-time injection of capital. SPAC sponsors are looking for a target company to merge with. Companies sometimes prefer SPACs instead of IPOs, since the process is faster, albeit not always that favourable to shareholders.

Both IPOs and SPACs are relatively riskier since the exact details of the deals can be murky for inexperienced. The influx of retail investors, excess capital at hand and not much to do during lockdowns formed a combustible environment. And neither retail investors nor professionals were ready for what is to come.

What is special about the SPAC cohort of 2021?

When we normally think about public companies, especially if you would look through their ranks in the previous decade or before, you would see a list of well run and usually profitable businesses. Steady growth at a reasonable price would often be the norm.

Unprofitable companies would often be the domain of Venture Capitalists. Moonshot opportunities with higher upside and higher failure rate. The earlier you invest the bigger risk you assume, however, the upside is almost uncapped. Angel investors often make hundreds of deals where the majority fails, however, one or two winners will make it up for all the failed cases.

As you move to later stages of the funding, there is less and less risk, however, potential upside gets limited as well.

And finally, you arrive at the public market, where one would expect a reasonable return of 6-8% when annualized over a long period. Investing in the public market can be seen as risky for people unfamiliar with the ways how capital works. It is still the safest form of equity investing though.

However, when you mix in the excess liquidity into the market, you suddenly get a shift. The risk profile gets skewed. Companies’ valuations get out of hand, everyone is suddenly throwing cash around. And of course, as a CEO or CFO, it is the right move to lean into the zeitgeist, get that funding secured and fill the coffers.

In a sense, there is hardly any particular group to blame, you can always point fingers, but with the world being one big ball of threads with all the interdependencies, it simply happened and many share partial blame.

Were the investors ready for the change?

For the investors that were focused on public markets, it meant one thing. They got exposed to a breed of companies they were not used to valuing. Companies that would under normal circumstances were raising the series D or E were suddenly jumping straight into the arms of the public. Going IPO or SPAC route, either of the ways allowed them to get new capital quickly, easily and in bulk.

But the beauty of the private market is that it is not really liquid and valuations both seem pegged at a certain value during the funding round, while simultaneously being relatively ephemeral throughout the rest of the existence of a company.

On the other hand, public markets are highly liquid and the price is displayed next to the ticker by the second. Where does this lead to? Price discovery.

Growing companies have a high degree of unpredictability of outcome and variance when one tries to extrapolate their valuation into the future. And the farther you go, the higher the variance. And without profitability, there is basically no floor to the stock price.

Those that bought the 2021 SPAC / IPO cohort were playing Venture Capitalist while being only somewhat used to the ways of public markets. And when the headwinds started piling up; inflation, the war in Ukraine, and rising interest rates, they were up for an awakening.

The first half of 2022 was carnage for tech and high growth. Both are heavily present in the SPAC cohort of 2021.

That being said, we cannot just simply chalk off the massive drawdown from all-time highs as a function of the valuation compression that emerged as a result of macroeconomic conditions.

Many of the SPACs are great companies with a bright future, such as Wejo, however, two things can be true at the same time and many of them are simply still very early stage and speculative. Land of dreams at worst, prototypes and early proof of concept at best.

The true challenge for many of them is going to be becoming a stable and profitable business. Certainty is what the public market loves. Certainty and hitting your numbers quarter in and quarter out is rewarded.

Palantir placed chips on the table as well

Among investors in the 2021 cohort was Palantir as well, the synergies are obvious, Palantir helps some of those innovative companies to gain an advantage over their competitors, influencing their progress. Almost an unfair advantage as investors usually do not have much say in the governance of a company unless taking an outsized stake.

In hindsight, it seems like Palantir overpaid for many of the SPACs, however, what would be the alternative? NOT getting their foot in the door? Palantir gets new use cases and with every problem solved grows stronger.

Among the most known inside Palantir SPAC cohort is BlackSky (BKSY), a geospatial intelligence company that recently won a contract from The National Reconnaissance Office (NRO) worth billions of dollars over the next 10 years. At the same time, BlackSky made a name for itself during the recent war in Ukraine, where it supplied allies with crucial intel related to the movement of the opposing army and mapping out the progress made.

Another great example is Sarcos Robotics (STRC) which combines human intelligence, instinct, and judgment with robotic strength, endurance, and precision. Which exactly fits the Palantir ethos, augment humans, not replace them.

Both above mentioned are examples of companies that despite crushed valuations are important and on a trajectory to make significant progress over time. And only in 5 years’ time we can make a better judgement as to what extent were these investments successful.

The earlier in the business cycle the company is, the riskier and often more innovative. They need to be. Younger, hungrier, and more inventive. They need to prove and come up with ways to outsmart the existing giants that have the advantage of having the resources, but the disadvantage of being too big to make changes fast enough.

If you are holding some of the SPACs, you are now standing in front of a decision if you are ready to hold them for a while longer. Some of them might get back to their all-time highs and beyond. While some will wither and die. Investing in SPACs is a different game, and unfortunately, many people were not ready for the ride.

On the other hand, if you have capital at hand, it might be a great time to dive deep into some of those out-of-favour stocks now. The market decided to throw the baby out with the bathwater and discard companies with potential. A handful of them will fulfil their potential and become important players 3 to 5 years down the road. Remember. The world in the future is never as you imagine it, but is different nonetheless.