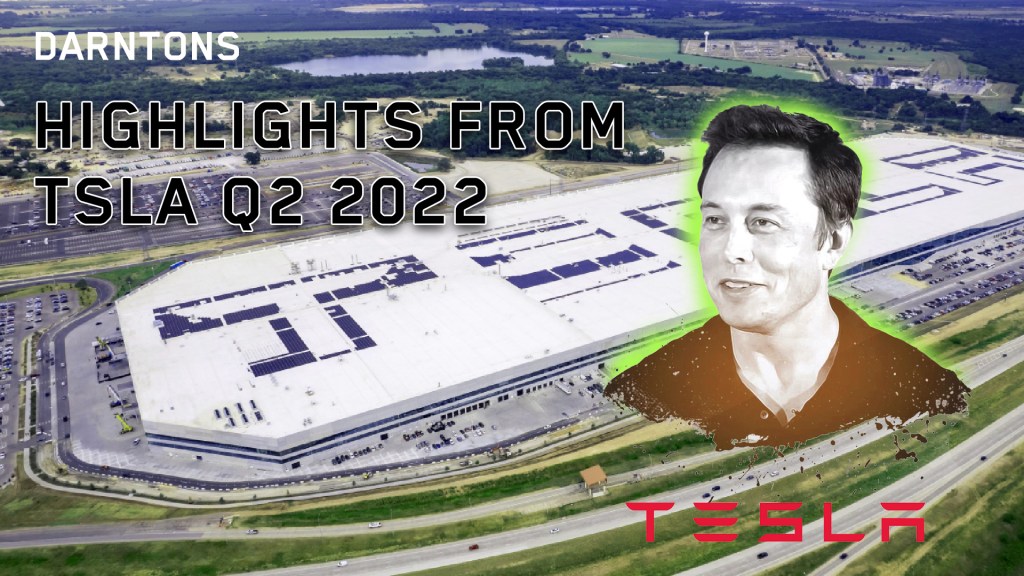 The Tesla second quarter of 2022 has been one of the tougher ones in Tesla’s history. Persistent complications with supply chains, closure of China Gigafactory due to government lockdowns and chip shortages are a few headwinds to note.

Despite that Tesla managed to navigate these obstacles with grace and secure another record-breaking quarter. Despite small missteps along the way, Tesla is positioned for an exceptionally strong second half of the year and is on pace with its self-imposed goal of 50% yearly growth.

The following are highlights from the conference call and investor deck.

Despite challenges and the shutdown of the Giga Shanghai for a significant portion of the quarter, Tesla managed to navigate these challenges with grace and deliver another strong quarter, reaching record production in June for both Shanghai and Fremont. It is only a matter of time before EVs are the majority on the road. When they year the ICE to EV ratio flips?

Elon addressed the point of chip shortage in his opening remarks during Tesla’s second-quarter conference call.

The past few years have been quite a few force majeures and it’s been kind of supply chain hell for several years. Credit to our awesome Tesla supply chain team for overcoming entirely difficult challenges.

He noted that unfortunately, chip supply is not in the Tesla’s hands to control and it might be a looming dampener of growth for the near future. The shortage is getting better, he admitted, yet the turnaround point is anywhere but near.

Tesla is known to manage to partly overcome this obstacle by substituting chips and rewriting the firmware on an ongoing basis and they continued this strategy during Tesla’s second quarter.

Elon praised the workers at Giga Texas that was assembled at record speed. From basically nothing a year ago into a fully functional and ramping up factory. That was possible also thanks to the friendly pro-business atmosphere in Texas and the help of both local and state governments that made sure there are no obstructions that would stand in the way of progress.

On the contrary, the Berlin factory had its fair share of controversy and obstacles, yet still, considering the known speed of German bureaucracy it is still fair to say the factory went up at a very reasonable timeline.

The next generation 4680 batteries are expected to be used in both new factories as a part of the structural pack in order to reduce mass and cost. However, the technology is still in progress as it is not simply a minor improvement but a more significant leap forward.

Elon emphasized that Tesla has enough 2170 cells to satisfy all vehicle production for the remainder of the year and are not dependent on 4680, which will be important next year. The second generation of manufacturing equipment for 4680 cells was installed in Texas.

Over 100 000 owners now have FSD beta and they are satisfied with the system. There are now logged over 35 million miles with FSD, more than any other company and possibly more than all the other companies combined.

Manufacturing takes the center stage for Tesla and is the main reason for its profitability. Thanks to the casting of large parts, it was possible to reduce the welding robot count by 70%, meaning the shop is roughly 1/3 of a size for a similar vehicle production.

Safety is another feature that Tesla intends to overdeliver. Thanks to vision, the car safety systems (airbags and belts) are able to react before the actual collision happens.

Tesla is on track to have a strong second half of the year and there is an AI day planned to showcase development.

How The Financials Improved During Tesla’s Second Quarter

Even though gross margins decreased to 27.9% due to temporary declines in production in Shanghai, Tesla still ended the quarter strong. The shutdown resulted in an idle factory and a cost associated with stopping and resuming production.

Another reason for margin decline is simultaneous ramping of two new factories that are not yet producing expected volume, while burning through lots of cash.

Tesla had to address the declining BTC prices and decided to sell a significant portion of its holdings. 75% of BTC was converted to FIAT.

Tesla also continues to retire the legacy debt and now has less than 66M of debt on the balance sheet.

Tesla AI Day, All You Need To Know

Are Tesla And Palantir Working Together?