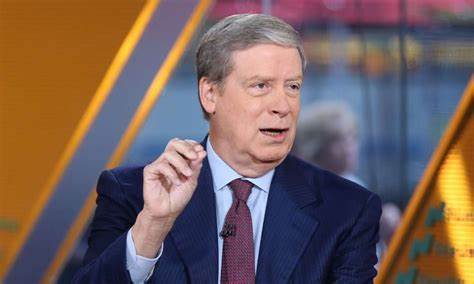 “Tell me about it, right?  Time flies.  And I just barely turned it on, the video, and you said, This zero interest rate policy the Fed is pursuing right now is insane.  So we’ve had eight years to inflate this baby, and I think we might be seeing some of the deleterious effects.”

“Now in 2021, you were on, I think, Squawk Box.  What was the term that you used for the monetary policy?  Because we had SPACs, we had NFTs, we had the AMC APEs, we had Bitcoin and Dogecoin, and yet the Fed still didn’t see a problem.”

STANLEY DRUCKENMILLER: “Yeah, I think I said it was the most radical monetary policy relative to the circumstances in history. But I was just incredibly frustrated with what to me looked like a Fed that was just taking unbelievable risks.  For what? The story of the time was inflation was 1.7, and we were buying 120 billion bonds a month.  This was post-vaccine, successful vaccine, because inflation was 1.7 instead of 2.  So we’re taking this massive gamble where you threaten 40 years of credibility with inflation, and you’re blowing up the wildest raging asset bubble I’ve ever seen, and I knew that the worst economies happen post asset bubbles; the ’30s here, post ’89 in Japan after the housing bubble blew up here.  So that’s what I went on.”

“If you remember, the Fed did 2 trillion in QE after vaccine confirmation.  And after the time I went on, you had the strongest momentum in employment in history on a rate of change basis.  At the same time their partner in crime, the administration, was doing more fiscal stimulus, again, post-vaccine, after it was clear emergency measures weren’t needed, than we did in the entire great financial crisis.  I’m not talking about before the vaccine, I’m talking about after.  Look, it turned out I was right.  I’ve been wrong plenty of times in my life.  The Fed was wrong.  They made a big mistake.  It’s not so much that they were wrong.  I’ve been wrong a lot.  It’s the risk-reward bet they made.”

“If you look at what the Fed did, the radical gamble they took to get inflation up 30 basis points from 1.7 to 2, it’s, to me, sort of a risk-reward bet.  You bet 1 to lose 40?  And they lost. And who really lost?  Poor people in the United States ravaged by inflation, the middle class, and my guess is the U.S. economy for years to come because of the extent of the asset bubble in time and duration and breadth it went on.”

STANLEY DRUCKENMILLER: “Because it’s not part of their mandate, in their opinion, and I don’t think they looked at it as a risk.  And to be fair to him, we’d had 20 years of disinflation, people tend to live in the past, and he had plenty of company, including on your network. So, the other thing I will say is, I’ve been wrong a lot in my career, and when I do, I correct my mistake.  What was particularly mind boggling to me, two to three months later, inflation takes off, it’s no longer a theory, it’s actually happening.  We come up with this ridiculous theory of transitory.”

“I mean, so we have 5 trillion in fiscal stimulus, we have 5 trillion in QE.  Janet Yellen is running down the TGA account, so that’s another trillion in stimulus.  And if you remember, the monetary framework in the fall of 2020, they were no longer going to forecast.  They were going to be data-dependent and wait until they see the whites of inflation’s eyes.  So guess what?  They saw the whites of their eyes.  And what did they do?  They forecast that it was going to be transitory.  When you make a mistake, you’ve got to admit you’re wrong and move on. That nine or ten months that they just sat there and bought 120 billion in bonds, I think the repercussions of that are going to be with us for a long, long time.”

“That’s what lit the match, absolutely.  I mean, come on, when I went on TV, I wouldn’t consider this one of my better calls.  You’ve got massive fiscal stimulus, you have massive monetary stimulus, and the thing is already starting to percolate.  And of course it’s what caused it.  What I will say, there’s a lot of people out there saying, well, Putin caused it.  Putin did extend it, all right, but can I remind everybody that when Putin invaded, the CPI was 7 percent year-to-year before he invaded?  And all this crazy stuff we did was to get inflation from 1.7 to 2, and we were already at 7. “

STANLEY DRUCKENMILLER: “I think it’s a microcosm of everything we’re talking about.  We’ve had 30 trillion of QE globally over the last ten years.  When you have free money and you have bond buying for that period of time, it creates bad behavior, okay? So the pension funds and the insurance companies, they’re buying bonds, repoing, taking the repo money and levering that up with equities and all kinds of stuff to try and enhance their returns.  And by the way, doing so when gilts were yielding, what, 2.8 and inflation is 10 or 15, that doesn’t happen if you don’t have the environment created the last ten years. So you’re the Bank of England and you’ve got this situation on your hands now which is quite serious, because I think 30 percent of mortgages there or at least 30 percent are heading toward being variable rate.  What do you do?  Well, what you don’t do is go and take taxpayer money and buy bonds at 4 percent when your inflation rate is over 10.  You don’t cure inflation with an inflationary act.”

JOE KERNEN: “Recently you talked about the potential for a ’69 — 1969 to 1982 potentially type situation for the next ten years here in terms of taxes being at the same level a decade from now.”

STANLEY DRUCKENMILLER: “Yeah.  I will say this.  The — it’s conventional wisdom, which I agree with, that stocks go up over the long term.”

“Then you have the secular forces.  You were right on the initial ramp of globalization, a fantastic thing.  Building supply chains around the world increases efficiency, causes disinflation.  That’s been a trend for 20 or 30 years.  Going the other way now, we’re disentangling all that.  That’s going to be inflationary.”

” And then, finally, and we’ve already kind of alluded to it, the last ten years of the bull market, you put it all in hyperdrive with 30 trillion of QE and zero rates.  Now the consequences of that are borne, and all those factors that cause a bull market, they’re not only stopping, they’re reversing.  Every one of them.  We’re going from QE to QT, unless you live in England this week.  They’re really unfolding. So when I put all of that together, the one thing I bristle about when I hear people on your network, is they say:  Well, I’m bearish, but I’m bullish for the long term.  Look, you can have a period of 15, 20 years, 10 years where the market doesn’t go anywhere.  That doesn’t mean you can’t make money.  You could have made plenty of money in the ’70s.  At various times we had two 60 percent rallies.  I’m not saying, you know, go get another job when you can’t do stocks.  I’m just saying we’ve had a hurricane behind us for 30 or 40 years, and it’s reversing, and I wouldn’t be surprised — in fact, it’s my central forecast — the Dow won’t be much higher in ten years than it is today.”

STANLEY DRUCKENMILLER: “We are in deep trouble.  So everything I said at those colleges is worse in terms of the metrics, except for one thing.  And what I miscalculated was I didn’t calculate zero rates; I used 4 percent rates.”

“Let me just say this.  I will be stunned if we don’t have a recession in ’23.  Don’t know the timing, but certainly by the end of ’23.  I will not be surprised if it’s not larger than the so-called average garden variety, and I don’t rule out — not my forecast, but I don’t rule out something really bad.  Why?  Because, if you look at the liquidity situation that has driven this, we’re going to go from all this QE to QT, we’re following an asset bubble.”

“I could see crypto currency having a big role in a Renaissance because people just aren’t going to trust the central banks. But, I don’t own Bitcoin.”