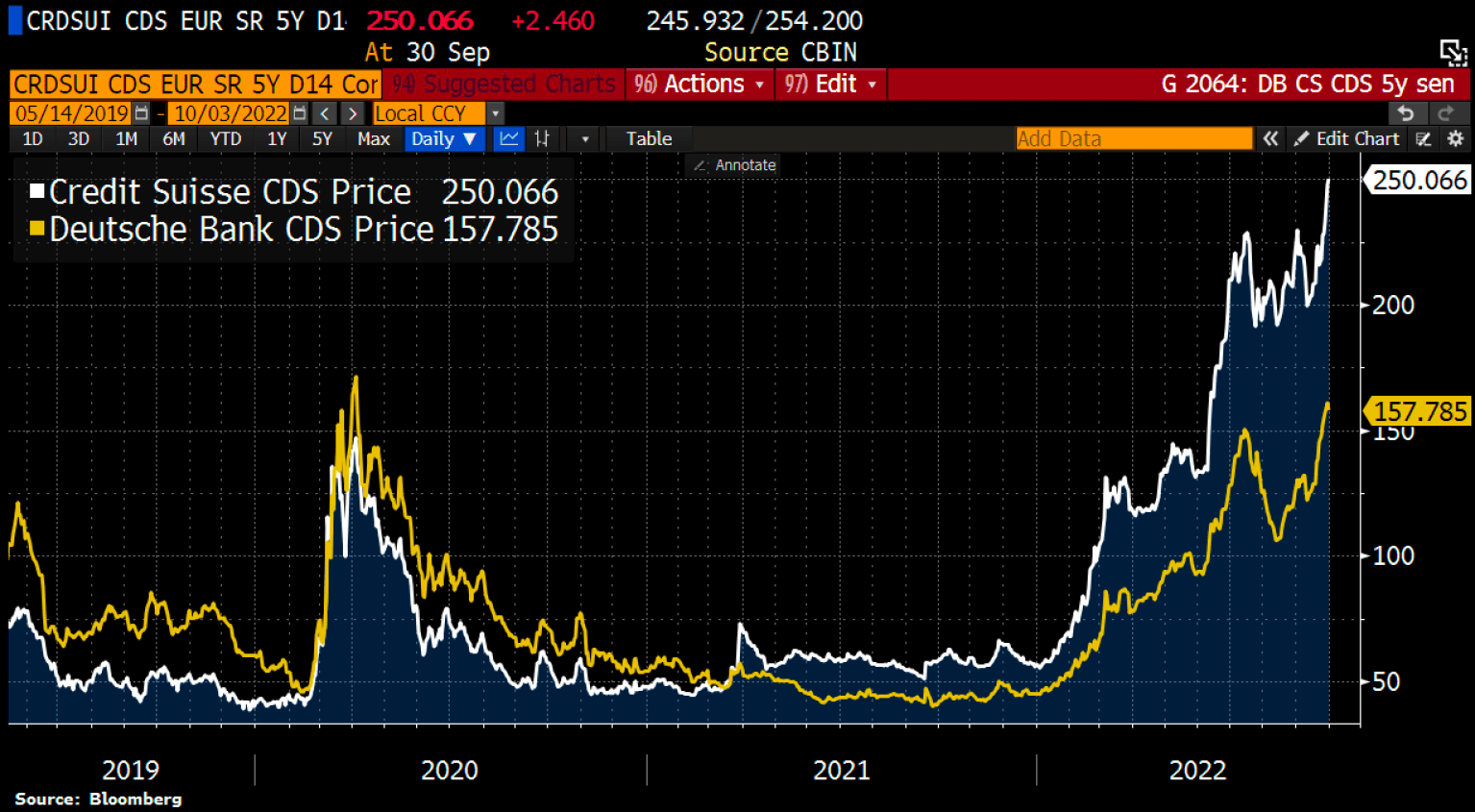 The Credit Suisse Situation Is Worsening: Must Read

Shares of Credit Suisse plunged nearly 10% in Europe’s morning session, after the Financial Times reported the Swiss bank’s executives are in talks with its major investors to reassure them amid rising concerns over the Swiss lender’s financial health.

Spreads of the bank’s credit default swaps (CDS), which provide investors with protection against financial risks such as default, rose sharply Friday.

A credit default swap (CDS) is a financial derivative that allows an investor to swap or offset their credit risk with that of another investor. To swap the risk of default, the lender buys a CDS from another investor who agrees to reimburse them if the borrower defaults.

Most CDS contracts are maintained via an ongoing premium payment similar to the regular premiums due on an insurance policy. A lender who is worried about a borrower defaulting on a loan often uses a CDS to offset or swap that risk.

For example, suppose a company sells a bond with a $100 face value and a 10-year maturity to an investor. The company might agree to pay back the $100 at the end of the 10-year period with regular interest payments throughout the bond’s life.

Because the debt issuer cannot guarantee that it will be able to repay the premium, the investor assumes the risk. The debt buyer can purchase a CDS to transfer the risk to another investor, who agrees to pay them in the event the debt issuer defaults on its obligation.

They followed reports the Swiss lender is looking to raise capital, citing a memo from its Chief Executive Ulrich Koerner.

One executive involved in the talks told the Financial Times that teams at the bank were actively engaging with its top clients and counterparties over the weekend, adding that they were receiving “messages of support” from top investors.

In a statement to CNBC on Monday, the bank said it will provide updates on its strategy review when it releases its third-quarter results on Oct. 27.

“It would be premature to comment on any potential outcomes before then,” it said.

The stock is down about 60% year-to-date.

“I trust that you are not confusing our day-to-day stock price performance with the strong capital base and liquidity position of the bank,” the CEO said in a separate staff memo obtained by CNBC.

FT said the executive denied reports that the Swiss lender had formally approached its investors about possibly raising more capital, and insisted Credit Suisse “was trying to avoid such a move with its share price at record lows and higher borrowing costs due to rating downgrades.”

The bank told Reuters that it’s in the process of a strategy review that includes potential divestitures and asset sales.

Credit Suisse has also been in talks with investors to raise capital with various scenarios in mind, Reuters said, citing people familiar with the matter as saying it includes a chance that the bank may “largely” exit the U.S. market.

The bank’s board and executive team is in the middle of planning a major revamp of the business, which would strip back its investment bank and lead to thousands of job cuts.

Under the latest plans put forward to the board, the investment bank would be divided into three and a “bad bank” holding pen for risky assets would be resurrected, the Financial Times reported this week. Credit Suisse board members have accepted they will need to sell some assets to avoid a capital raise, with profitable businesses such as the New York-based securitised products business earmarked for sale.

Citi analyst Andrew Coombs said this was a possibility in a best-case scenario. “The net charge for an securitised products group exit could potentially be absorbed without the need for a capital raise, which we expect management would be keen to avoid with the stock trading on only 0.3 times price to tangible book value,” he said. Last month, analysts at Deutsche Bank said the costs of paring back the investment bank would leave a SFr4bn hole in the group’s capital position due to restructuring costs, growing other business lines and strengthening its capital ratios.

The latest from Credit Suisse signals a “rocky period” ahead but it could lead to a change in the U.S. Federal Reserve’s direction, said John Vail, chief global strategist at Nikko Asset Management.

“We understand the nature of the concerns, but the current situation is night and day from 2007 as the balance sheets are fundamentally different in terms of capital and liquidity,” the report said, referring to the financial crisis that unravelled in 2007.”

“We believe the U.S. bank stocks are very attractive here,” the report said.