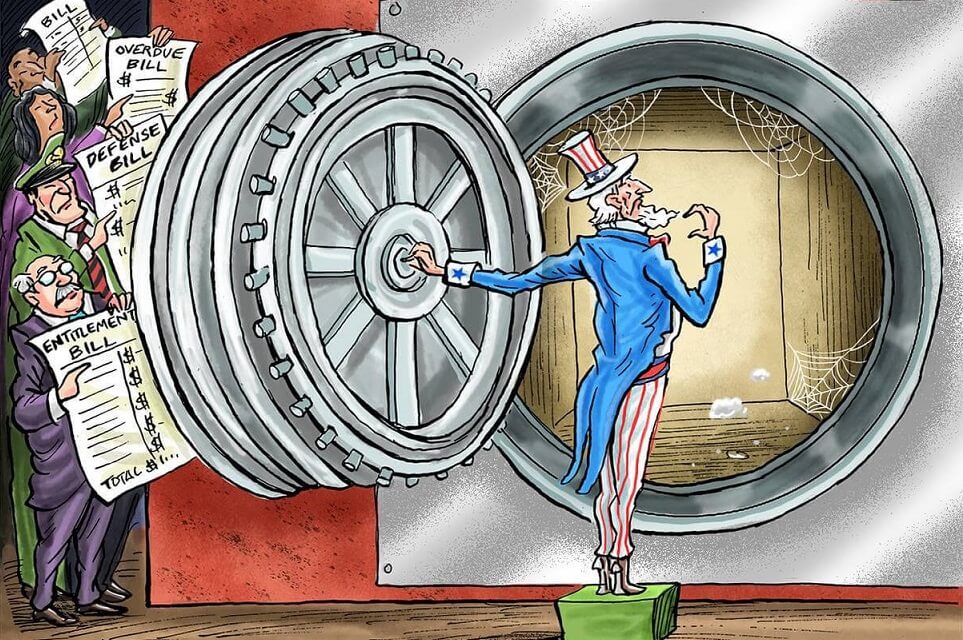 The national debt is the amount of money the federal government has borrowed to cover the outstanding balance of expenses incurred over time. In a given fiscal year (FY), when spending (ex. money for roadways) exceeds revenue (ex. money from federal income tax), a budget deficit results.

To pay for this deficit, the federal government borrows money by selling marketable securities such as Treasury bonds, bills, notes, floating rate notes, and Treasury inflation-protected securities (TIPS). The national debt is the accumulation of this borrowing along with associated interest owed to the investors who purchased these securities. As the federal government experiences reoccurring deficits, which is common, the national debt grows.

Simply put, the national debt is similar to a person using a credit card for purchases and not paying off the full balance each month. The cost of purchases exceeding the amount paid off represents a deficit, while accumulated deficits over time represents a person’s overall debt.

The federal government needs to borrow money to pay its bills when its ongoing spending activities and investments cannot be funded by federal revenues alone. Decreases in federal revenue are largely due to either a decrease in tax rates or individuals or corporations making less money.

The national debt enables the federal government to pay for important programs and services even if it does not have funds immediately available, often due to a decrease in revenue. Decreases in federal revenue coupled with increased government spending further increases the deficit.

History Of US National Debt:

The U.S. has carried debt since its inception. Debts incurred during the American Revolutionary War amounted to over $75 million by January 1, 1791. Over the next 45 years, the debt continued to grow until 1835 when it notably shrank due to the sale of federally-owned lands and cuts to the federal budget. Shortly thereafter, an economic depression caused the debt to again grow into the millions.

The debt grew over 4,000% through the course of the American Civil War, increasing from $65 million in 1860 to $1 billion in 1863 and around $2.7 billion shortly after the conclusion of the war in 1865. The debt grew steadily into the 20th century and was roughly $22 billion after the country financed its involvement in World War I.

Notable recent events triggering large spikes in the debt include the Afghanistan and Iraq Wars, the 2008 Great Recession, and the COVID-19 pandemic. From FY 2019 to FY 2021, spending increased by about 50%, largely due to the COVID-19 pandemic. Tax cuts, stimulus programs, increased government spending, and decreased tax revenue caused by widespread unemployment generally account for sharp rises in the national debt.

How The US Can Pay Off National Debt:

U.S. economic growth has historically outpaced its debt. The U.S. debt was $258.68 billion in August 1945, but the economy outgrew that in a few years. GDP more than doubled by 1960. Congress believes that today’s debt will be dwarfed by tomorrow’s economic growth.

Increasing the GDP has a twofold benefit: It generates extra revenue to pay down debt, and it reduces the debt-to-GDP ratio if GDP growth outpaces debt growth.

Congress could shift spending from defense to job-creation areas like infrastructure and education. Almost 15% of government spending goes to the military. But past studies indicate that money spent on the military is less effective in creating jobs than money spent in other areas.

According to a report from the Political Economy Research Institute at the University of Massachusetts, Amherst, $1 billion in education and mass transit spending could produce more than twice the jobs created by military spending.11

Job creation can help boost the GDP, which can help lower the nation’s debt-to-GDP ratio in many cases.

The most striking feature of reductions in national debt is that they tend to occur during periods of economic growth, which reduces the debt to GDP ratio.

The UK reduced its debt to GDP from 240% of GDP in 1950s to 40% of GDP in 2002 – despite rarely running a budget surplus. It was economic growth that led to rising tax revenues. The concern is that if we are entering a period of secular stagnation – then it will become harder to reduce debt to GDP

The federal government is charged interest for the use of lenders’ money, in the same way that lenders charge an individual interest for a car loan or mortgage. How much the government pays in interest depends on the total national debt and the various securities’ interest rates.

Economists debate whether the spending is sustainable. The U.S. finances the debt by selling bonds at auction. Demand has traditionally been high due to the size of our economy and a historically stable government.

The cost to just finance our debt is expected to be $378 billion in 2021 and increase to $665 billion by the end of the decade, according to CBO estimates. That money will be spent only on interest, not on the principal.

Billionaire investor Stanley Druckenmiller sees a “hard landing” for the U.S. economy by the end of 2023 as the Federal Reserve’s aggressive monetary tightening will result in a recession.

“I will be stunned if we don’t have a recession in ‘23. I don’t know the timing but certainly by the end of ‘23. I will not be surprised if it’s not larger than the so-called average garden variety,” Druckenmiller said at CNBC’s Delivering Alpha Investor Summit on Wednesday. “I don’t rule out something really bad.”

Why National Debt Is A Cause For Concern:

The U.S. national debt has amounted to $29 trillion by running annual deficits, with the last surplus being 20 years ago in 2001. Reacting to the Covid-19 pandemic that has gripped the globe, the U.S. government has accelerated the build-up of debt in an effort to keep households and firms afloat.

Shortly after the pandemic outbreak (November 2019), the Trump administration issued an emergency stimulus package of $6 trillion to help families, businesses, and struggling industries like airlines and restaurants. Since then, President Biden has unveiled more plans to aid households and firms through the pandemic (e.g., The American Jobs Plan, the Build Back Better Act).

National debt is a cause for concern for two main reasons: (1) it raises the probability of default and (2) has stark implications for US leadership and national security. Moreover, heavy government spending that has driven up the debt has also stoked inflation to historic highs, threatening to make inflation far more than a “transitory” phenomenon.

The massive amount of borrowing by the U.S. government has led to fierce debate over the threat of default. The credit of the U.S. has been built on centuries of commitments with no defaults to date. However, the $29 trillion in national debt has raised the threat of default higher than ever, with total public debt as a percentage of GDP standing at an astonishing 122.5% as of Q3 2021.

It has been shown that nations with ratios of public debt above 90% had lower economic growth compared to nations with public debt below 90%. Furthermore, many observers have noted that a failure to raise the debt ceiling could force the U.S. to reduce expenditures in sectors like healthcare or other public programs.

Some observers may also argue that if the U.S. could not pay its debts due to its inability to issue more bonds, the nation could default. However, the U.S.’s likelihood of defaulting on its debt is very low. While US default is theoretically possible, a tiny minority of individuals believe that the U.S. would default.

The national debt undermines the status of the U.S. as a global leader through the crowding out of investment. This effect happens when the government’s large debts raise interest rates and reduce the amount of funds available for private investment. Furthermore, this crowding out effect can impact spending on military, diplomatic, and humanitarian projects around the world.

Moreover, the crowding out effect reduces investment for crucial areas like infrastructure, education, and research, which can create a considerable drag on the economy. Overall, the level of interest rates caused by the government’s large debts can impact the nation’s industries and overall economy, all of which undermine the status of the U.S. as a global leader.

The large national debt also has negative implications for national security. Higher debt servicing costs could lead to cuts in spending for defense and other national security concerns, drive up interest rates, result in higher taxes and retard economic growth.

Lowered defense spending would decrease U.S. influence in international affairs, undermine confidence among its allies, and reduce the ability of the U.S. to respond to national security crises. Additionally, the impact of the burgeoning national debt on U.S. economic standing could lead to a rise in the influence of rivals, particularly China. Moreover, especially due to rising geopolitical tensions resulting from ongoing war in Ukraine, national security could be seen as a rising priority around the globe.

Massive government spending has driven up the national debt to record levels, leading to inflation that has not been seen since 1982. Over the past 12 months, the consumer price index has risen 7.5% which is much higher than the Fed’s set target of 2%. The Chairman of the Federal Reserve, Jerome Powell, has previously called this sharp rise in consumer prices as “transitory.”

However, post his re-election as Chairman, Powell revised his view on inflation in early December,  claiming that inflation is not “transitory” and that the rise in prices could leave a “permanent mark in the form of higher inflation.” If inflation keeps rising, the purchasing power of American families will suffer as nominal wage rates have lagged inflation as of January 2022, leading to real disposable income falling. This will also undermine consumer confidence, decrease consumer expenditure, and hinder economic growth.

Fears of the debt ceiling breach, which would stop the issuance of bonds by the United States, have also risen as changes in the debt ceiling level have steadily increased as spending has increased. If the debt ceiling were to be breached, the Treasury Department would have to start to decrease spending public programs until the ceiling is raised again.