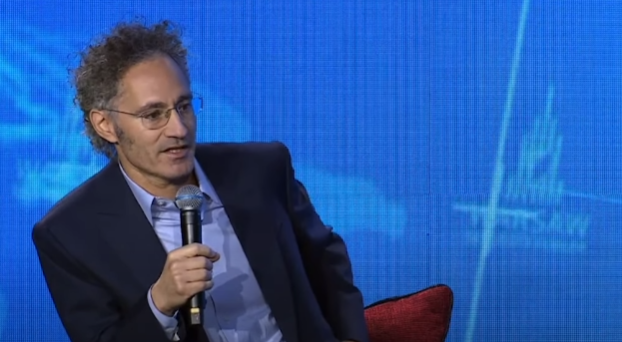 “Palantir’s technologies will be as influential for this century, as the radar was for the last.”

The following article is based on Alex Karps latest speech. Within the writing, I will unpack the commentary, and give my analysis of Palantir.

Whilst writing, I had a surreal realisation: “Palantir’s technologies will be as influential for this century, as the radar was for the last.”

It is clear that there has been a fundamental change in warfare over the past year. We should not trivialise the disruption of this change, and how the ripple effects of this war will transform the way geopolitical tensions are treated.

The fact that Ukraine has been empowered via Western software, has ultimately resulted in David beating Goliath. Previously, this was not the case. Beforehand, the nation that had the biggest budget, and the best physical weaponry would win. In fact, when Russia invaded Ukraine, it was almost fully recognised that Russia would totally walk over Ukraine. But this could not be further from the truth.

We now have a situation in which a small nation can become transformed into a juggernaut via the empowerment of good software solutions. This will revolutionise the ways in which wars are fought and will transform national security and software.

Furthermore, this also shows the exponentiality of software and data in conjunction. Through the use of good software & data, one has the ability to uncover insights in which previously were not known.

Furthermore, it is no secret that war accelerates innovation. Within times of disorder and mass chaos, innovation prevails and succeeds. After speaking with innovative speaker and consultant – Jim Harris – he informed me that within the 2 year period of COVID, over 10 years of innovation prevailed.

The same is true for war.

History shows us that during times of war, the most important innovative breakthroughs succeed. One that is particularly important was the use of the radar. The radar was a fundamental innovation that transformed Britain into a technological superstar during WW2.

Britain, before the use of the radar, were losing against the Nazis. It was almost inevitable that the Nazis would invade the small island, and win the war.

This was until the last minute introduction of the radar, in which totally changed the course of the war.

There are drastic similarities between the radar, and Palantir. In fact, I would go as far as stating that Palantir is as fundamental for the next century, as the radar was during the 1900s.

To explain further, there were serious predictions during WW2 that Britian would lose against the Nazis. In the looming battle between world powers, the allies lagged far behind the enemies in what Winston Churchil described as the “secret war”, or the race for the most powerful technologies. Germany had new submarines called U-Boats in which threatened to dominate the Atlantic, and strangled supply chains to Europe. The planes of the Nazis were ready to disseminate Britain, outclassed those held by the British. And, the horrific discovery of nuclear fusion, put Hitler within reach of a weapon with almost unfathomable power. The enemies were winning.

The radar changed this.

Interestingly, similarly to Palantir, the radar was actually discovered in 1922 – over 20 years before WW2 started. However, the radar was deemed as a passing FAD, and a technology that would never work. This is commonly the case with technological breakthroughs that change the course of society. These technologies are trivialised, however eventually end up transforming the way society is run.

Leo Young, and his partner, Hoyt Taylor, accidently discovered the radar whilst experimenting outside in the early 1920s. After recognising the importance of the technology, the youths approached US Governmental officials to research into their breakthrough, and perhaps adopt the technology into current warfare.

However, the Government officials were not interested. They thought the technology was trivial and did not work. For over 20 years, those that identified the radar, had no luck. Nobody was interested, and nobody wanted the technology.

One Chief wrote that the idea was a “wild dream with practically no chance of real success”. However, just a few years later, and this technology would change the course of history.

It was only until the 1940s in which the US Government recognised the lead that the enemies had when it came to technological innovation. This resulted in a specialised team that was put together to nurture, and create loonshot innovations.

By the end of the 1940s, a team of the best physicians and technologists came together to develop the Microwave Radar. This was over 10 years after the initial discovery of the technology.

In July, Hitler attacked. His generals anticipated the Luftwaffe, which had twice as many planes as the RAF, would achieve air superiority in two to four weeks.

Hitler’s generals developed plans for a land invasion of Britian, in which would follow the victory in the air. This victory would never come.

British radar would detect enemy aircrafts before they neared the costs. This intelligence enabled Britain to concentrate their limited forces against each wave of attack. One German bomber pilot wrote: “if there were any more missions like that, our chances of survival would be nil”.

Two days later, Hitler postponed the land invasion of Britain. This was Hitlers first loss of the war. Fundamentally, the radar totally changed the direction of the war. The radar was one of the most influential reasons as to why Britain won the war.

There are disturbing similarities between software (Palantir), and the innovative breakthrough of the radar.

Palantir’s technologies will be as influential for this century, as the radar was for the last.

CEO Karp, during his speech, also mentioned the necessity of a procurement process. But what does this actually mean?

Within software, there is a strange dynamic in which, from an outsiders POV, it can be very hard to understand what software works, and what does not. This is likely especially true if one is not technical.

Palantir’s Global Defence Lead stated that: “there are unique problems within selling software. Often it is hard to tell if software actually works. Commonly present is the miss-match between a casual observer understanding if the software functions or not. This can become problematic for software companies – if these companies are unable to showcase their product in real-time.”

Therefore, what commonly occurs is a miss match between procurement processes, and the best software winning.

Luckily, for Palantir, they have the ability to showcase their products in real time. This is not the case with many other software companies.

The CEO also pointed towards the Governmental lawsuit for Palantir.

Back in 2019 Palantir was involved within a lawsuit with the US Government based on the USCC2377 Commercial Item Preference Law. This law states how Governments must look towards the commercial markets before attempting to build in-house solutions. Back in the 1980s Governments were building everything in house, leading to much higher costs and a lack of successfully functioning products. Doug expressed Palantir’s unfortunate association with the partisans & the overall elongated decision making processes within Governments.

Palantir after winning the lawsuit, ended up setting precedent for the case, reinforcing the necessity that Governments must look towards commercial clients first – instead of trying to build everything in-house.

During the interview, Alex Karp also spoke about the East, VS the West, and the common belief that the US is losing within their software battle against China.

A company is purely the organisation of humans towards one main objective. Thus, the ways in which these humans are organised, and the methods of culture and structure can enable these humans to produce outstanding results. Through good human organisation, one has the ability to enable the flow of ideas throughout the company, regardless of rank or status.

Also, through good human organisation, this is a way to correctly align incentives for success.

For example, start-ups are usually a good place to look when it comes to good incentive structures, and human organisation.

Why? Well because, the incentive structures are aligned for success.

But, within larger organisations, often this is not the case. Sometimes, incentive structures are aligned to gossip, internal politics, and focus solely on status, instead of innovation. This, is often why many large companies stagnate, or fail.

The same applies to nations.

How can the flow of good ideas occur within a dictatorship? It can’t. People are more focused on rank and status, rather than taking true risk. If you can’t speak up, or question narratives, how in the world can you innovate? You can’t.

Fundamentally, a radical dictatorship halts the flow of dialogue, and discussion. This will become the main failure for the East. Alex Karp seemed to reiterate this view within his commentary.

Also present is the issue of talent. Why would one work within China, or Russia, with full knowledge that the technologies will be taken by the Governments once they start bearing their fruits.

Talent is a vital intangible factor that enables success of companies and nations. Without the best talent, the odds are against you. Failure will prevail.