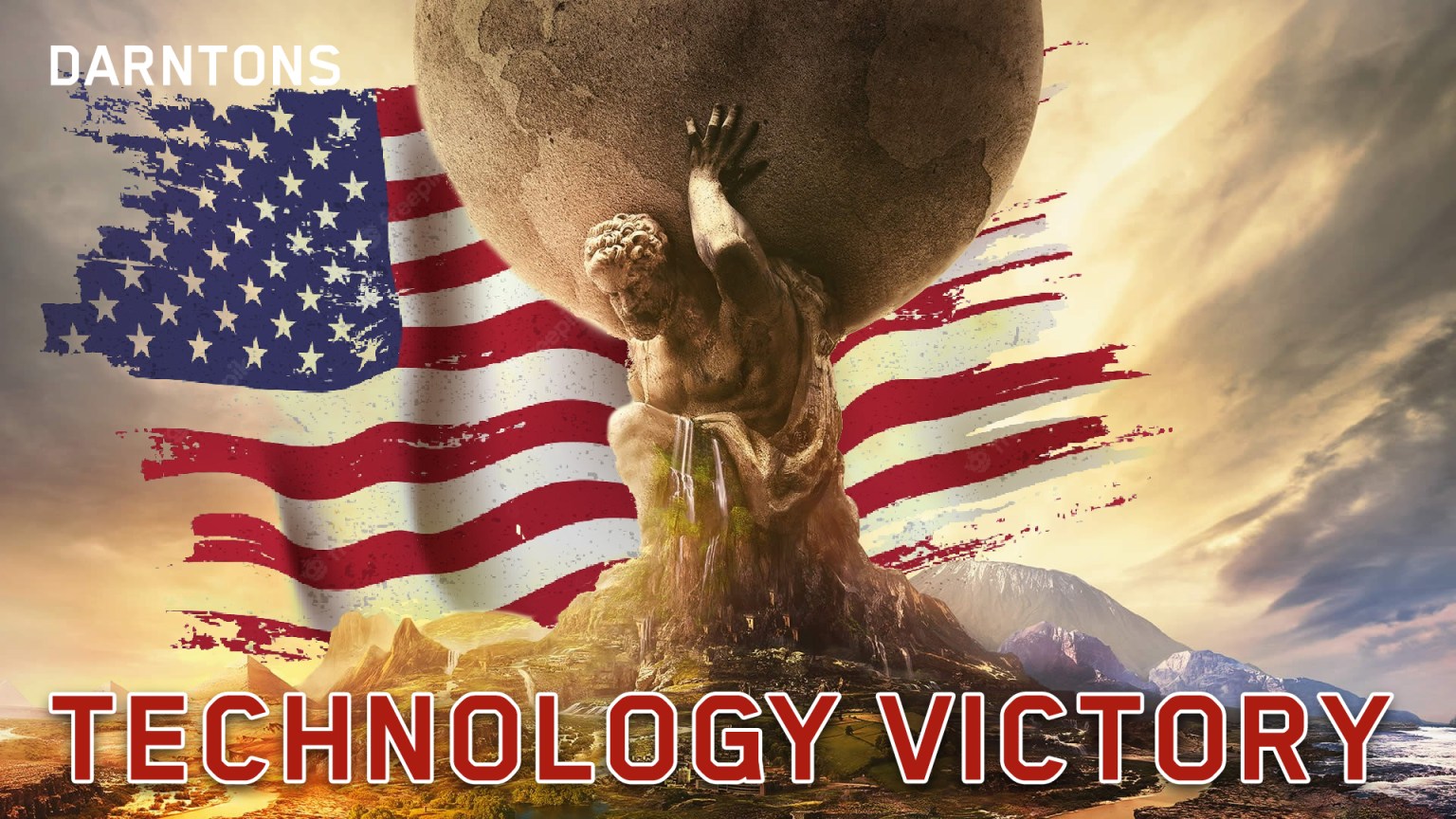 Victory Of The US: Hegemony Through Tech

The United States has been an undisputed superpower since WW1. And since then, the US hegemony has only grown. What is next? And what is the main difference-making factor?

With the ever-accelerating world of progress and innovation, in our world, scientific victory is what matters. And the US is leading. In fact, not just leading, it continues to absorb capital and earnings from all corners of the globe, reinforcing the US hegemony.

Why Not Invest In The US?

There is a widespread belief that investing the majority of one’s net worth in US stocks is a terrible idea because doing so exposes you to significant risk if the stock market of that country performs poorly.

The fact that the US stock market has historically outperformed the rest of the world does not guarantee that it will continue to do so in the future. Is the US hegemony over or here to stay? In fact, conventional wisdom holds that the opposite is more likely to be true, and if you only invest in the US stock market, you will miss out on opportunities when the stock market of another nation soars.

This explains the widespread belief that making investments in the World total index is the best course of action. Since 95% of investors will fail, you should quit trying to outperform the market and instead put all of your monthly investment funds into the Vanguard Total World Stock Market Index, or VT.

I strongly disagree with that opinion. Not because I am a fanboy of the United States. In fact, I grew up in the Czech Republic and spent most of my adulthood in Denmark.

There is a very particular reason why I only invest in the US, and like with all of my investing decisions, that rationale is based on data and analysis, despite the prevailing consensus that investing only in U.S stocks is not a wise idea.

Lost Decades Of the Japanese Economy

Many people argue against exclusively investing in American stocks, and disagree with US hegemony, citing Japan as an example. Japan experienced an explosive stock market boom in the 1980s, which led to the country’s top four corporations in terms of market capitalization in 1989.

The Nikkei, the index for the Tokyo Stock Exchange in Japan, skyrocketed in the 1980s, rising by around 500% and reaching its high in 1989. In fact, 13 of the top 20 largest corporations by market cap were Japanese, while only six were from the United States. After that, the Japanese stock market crashed, and for the subsequent 30 years, it hasn’t recovered to its 1989 peak.

This period is commonly known as the lost decades and the popular argument is that the U.S stock market is doing something similar and risks having the same thing happen there as well. If you overlook this year so far, it has been increasing rapidly for the last ten years, and some people claim that the US Stock Market is in a massive bubble.

Why then would you want to invest in this bubble and why would you choose to buy American stocks? Take a look at the ranking of the biggest Japanese corporations from 1989, for example. Even if you look further down the list, the businesses that dominated the Japanese stock market were based in Japan and conducted almost all of their operations there. These businesses included the Industrial Bank of Japan, a Japanese bank that operates in Japan, Sumimoto Bank, which operates in Japan, and Fuji Bank.

Some of them, like Toyota or Hitachi, exported goods made in Japan, but if you invested in the Japanese stock market in 1989, you were investing in businesses based in Japan that operated in Japan and earned almost all of their revenue there. The same was largely true in the US; you can see that the biggest businesses in the US in 1989 were Exxon Mobile, which mostly operated in the US, as well as others, like General Electric.

Spark Of The Emerging US Hegemony

But because businesses like IBM and Philip Morris were considerably more global, you could already detect a hint of difference in this situation, the first glimpse of the US hegemony. If you invested in those businesses, you weren’t really relying just on the US economy or the US stock market because they would operate, create, and sell their products on a much larger worldwide scale. As a shareholder, you would gain if consumers increased their purchases of those companies’ goods because of strong economies in Asia, Europe, Africa, South America, and Australia, among other places.

Just ten years later, in 1999. Only two Japanese corporations were among the top 20 before the Japanese stock market crashed and lost the vast bulk of its value. It’s interesting to note that only one of them—Toyota—was on the same list ten years prior. Toyota was the only company from the previous list to actually operate internationally outside of Japan and sell vehicles all over the world. Toyota’s market valuation actually grew by 200 per cent over the course of 10 years—a strong 13% annual growth rate—while the Japanese stock market was in free fall.

But take note of the modification at the top of this list. Gone are the big Banks that happened to trade on the U.S stock exchange but run a global business selling to people all over the world. Microsoft topped the list in 1999 but the transition was not complete, it was just starting. Walmart was still number four and operated almost exclusively within the United States and Canada. Exxon mobile was very heavily U.S Centric.

Today and 1989, or any other time in the past, are substantially different from one another. A corporation can now be situated anywhere it chooses and still functions on a truly global scale because of changes in the global economy. something that was virtually unthinkable thirty years ago. And this is the key enabler of the Us hegemony.

The largest businesses in the world don’t operate in isolated markets in a single nation. They are industry leaders on a global scale. In reality, they essentially turn the GDP of every nation in which they do business into shareholder value on the American stock market.

Additionally, many of these businesses have grown to the point that the US market is very competitive or has at least reached a saturation point. In many cases, they are still in the very early stages of worldwide growth.

For instance, compared to the prices they can charge within the US, Google’s advertising business, which is its primary source of income, only makes pennies from most non-US countries. This is due to the fact that the US is a considerably wealthier nation and that the ad industry there is far more developed than it is in many other nations and regions, such as Asia or Africa.

And over the following few decades, you would naturally anticipate that those nations will play catch-up as they have in the past. More and more people will escape poverty in nations like India, and in the next years, they will take the lead as a major force in the world economy.

I have no doubt it will occur, and as it does, the internet-era behemoths will be able to capture much larger portions of those industries and make a lot more money. As their nations continue to expand, there will undoubtedly be businesses established in India, Indonesia, or Brazil that will prosper as well. Some could even argue that some of these businesses will exceed those in the United States.

I anticipate the inverse to occur. On average, the globe is getting smaller and smaller for businesses to function in, even though some of those businesses will soar through and produce amazing outcomes. As other nations expand quicker, I see US corporations like Google, Microsoft, and Apple greatly increasing their earnings from overseas, strengthening the US hegemony.

In reality, if you look at the commercial growth outside of the US for all of these companies, it is growing at a much higher rate than inside the US, proving that this is already happening.

These businesses all just so happen to be situated in the US, especially in Silicon Valley in California and other tech centres. This is significant since these businesses choose only the best engineers, scientists, and workers from around the globe. From nations like India, China, Malaysia, or Brazil, many of the brightest young individuals have the aspiration of working for a Silicon Valley corporation in California. Many people finally succeed. This indicates that there is a significant brain drain away from those regions and into the American stock market. Currently, there is a skill concentration that is heavily biased toward the United States.

The vast bulk of investment for start-ups and expanding enterprises is also headquartered in the US, which is leading to a self-fulfilling cycle because it is no longer necessary to reside in India as it was thirty years ago in order to sell the top software or technology. You must have a Palo Alto address, and certainly, in the long run, things of this nature can and presumably will change.

I am aware that many other nations, including many in the world, have very successful tech hubs with highly intelligent individuals employed there, but I do not believe that this phase of the shift has reached its apex.

The US technology hegemony just getting started, in my opinion. The world will continue to contract in terms of how commerce operates over the next 20 years, and in situations where a product or service does not have to be offered locally, global leaders will continue to outmuscle and outcompete local providers’ subpar offers.

This is arguably the most fascinating point that supports the entire thesis I’m making—I don’t invest in US companies just because they are based there.

I am agnostic on that front and would have invested even if Google had its headquarters somewhere else. I invest in businesses where I see a very high potential for growth over the next 10 to 20 years, and despite the fact that I frequently consider businesses in Europe and Asia, the most promising opportunities, in my opinion, are located in the United States.

I continue to invest substantially in U.S. stock markets for the reasons I just outlined, and I do not share the opinion that doing so is inherently a stupid thing to do.