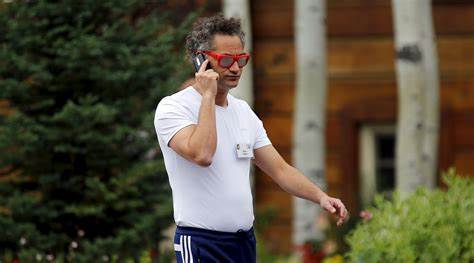 What is Palantir IL-6?

With the debut of Palantir Federal Cloud Service (PFCS) in 2019, the company first gained FedRAMP and IL5, and now, with this accreditation, it expands its cloud offering to include a new Secret Region. As one of just three firms obtaining an IL6 Provisional Authorization from DISA for their cloud offerings, Palantir joins Microsoft and Amazon Web Services (AWS).

IL6 is designated for the processing and storage of data with a classification level up to SECRET. Information that must be processed and kept at IL6 for a cloud deployment can only be processed in a DoD private/community cloud or a Federal government community cloud.

It is the highest level and Palantir joins AWS and Microsoft as the only three companies at that tier.

Palantir alluded to their ambition to achieve IL-6 in their Q4 2020 presentation. At the time they were at level IL-5 alongside a few other companies. Most other software providers (Oracle, SAP, Salesforce, Snowflake or Google) achieved levels IL-2 or IL-4. 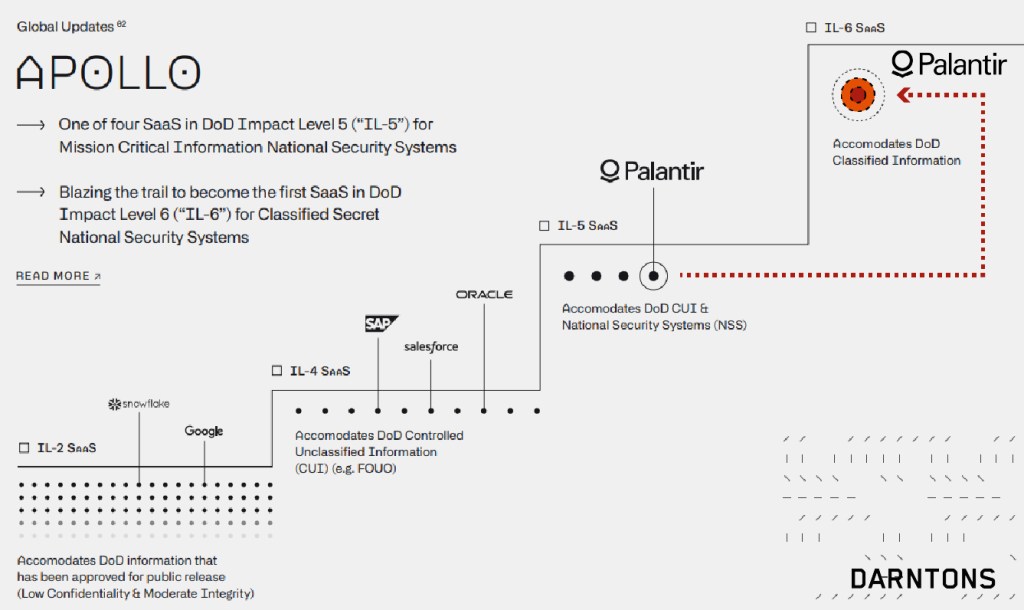 Now the Department of Defense and Mission Partners can now make use of Palantir Federal Cloud Service IL6 to address the problems of next-generation warfighting.

“At Palantir, we design systems that address the unique constraints and mission goals for our partners,” said Mitchell Skiles, Senior Architect, Federal, Palantir Technologies. “This accreditation is a testament to that. The expansion will address growing scale consideration and offer robust data protection as the Department adopts new digital capabilities, and critically, will provide easier access to the people who rely upon software every day for their most essential missions.” 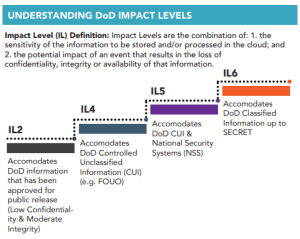 The recent initiation of IL6 for Palantir has led to more speculation regarding the possibility of the company becoming a software prime for the US Government.

A software prime describes companies that have frequent roles as contractors who in turn subcontract to other companies within Governments.

There are currently 4 main Prime Government US Contractors. These Prime Contractors are all hardware companies, namely:

However, there is no software prime. Palantir Technologies may be the first.

Shyam Sankar stated in an exclusive call month ago, that the Government business growth rate within 2018 was extraordinary. However, to explain the recent deceleration, there is often a drag that existing resolutions create as they prevent new starts from occurring.

“Things that are new, they are delayed,” said the COO. Sankar concluded, within the call with analysts from Morgan Stanley, that there are often complicated dynamics with budgets. This therefore can create volatility for upside, as projects can get caught up in blitz to get money out the door.

To add to this, Palantir as the first software prime for Governments was an interesting comment by the COO within a recent call with Morgan Stanley analysts. A software prime describes companies that have frequent roles as contractors who in turn subcontract to other companies within Governments.

There are currently 4-5 hardware primes for the US GOV, and within the FY2020, these companies together received 54% of all of DOD’s contract obligations for the year. If Palantir were to become a software prime for the US GOV, not only would this validify concerns related to Palantir product capabilities, however it would also indicate towards a possibility for more consistent and larger revenue streams from the US GOV.

Fundamentally if Palantir were to become the first Government Prime Software contractor, this would revolutionise the way contracts are delt, potentially leading to more solid and consistent revenue streams within the Governmental sector.

To add to this, in consideration of the fact that Palantir has recently launched their product update, Gotham Europa, this shows Palantir’s ambitious attitude to integrate their software more aggressively across European nations.

“We analyzed PLTR U.S Goverment contracts in an effort to understand traction among various agencies. We found that a substantial portion of U.S. government revenue is undefined (subcontracted through contracts with other companies) or classified (likely a large portion of DOD business); this undefined revenue was 63% in 2021. PLTR expanded the number of contracts with top level departments to nine in 2021, up from six in 2019, according to the data, suggesting a broadening of traction across various government departments.”