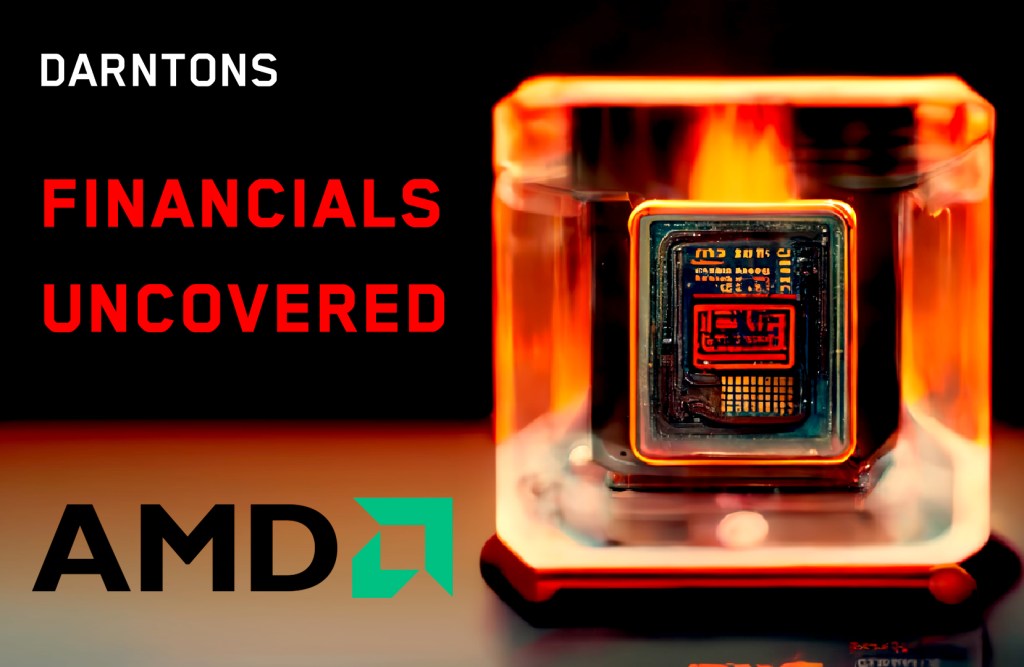 AMD is well positioned to capitalize on the need of humanity to compute more and faster as well as the emergence of AI as we uncovered recently. So having the qualitatives covered, let us take a look at the quantitative (AMD financials) and dissect the latest quarter.

After making several acquisitions, the company has divided its business into four segments: data center, client, gaming, and embedded. Each segment contributes about 1/4 to the total revenue, creating a healthy mixture.

The embedded segment includes both AMD and Xilinx embedded products.

Since Q2 2022, the financial statements included Xilinx’s results for the first time and AMD also closed the acquisition of Pensando during the quarter. The Xilinx deal does not appear to have negatively impacted AMD’s income statement, with the exception of $616 million in amortization of acquisition-related intangibles that is affecting the income statement in the short term and diluting shareholders’ equity.

In the short term, the company may also face weakness in the consumer market, but this does not change our long-term view on AMD financials.

While we are pleased with the performance of our Data Center, Gaming, and Embedded segments, each of which grew significantly year over year, our third-quarter results also reflect lower-than-expected Client segment revenue. Third-quarter revenue was $5.6 billion, up 29% from a year ago.

Gross margin was 50%, up 150 basis points from a year ago, primarily driven by higher revenue in the Embedded and Data Center segments, partially offset by lower Client revenue and $160 million of inventory, pricing, and related charges in the graphics and client businesses. Operating expenses were $1.5 billion, compared to $1 billion a year ago as we continue to scale the company. Operating income was up 20% from a year ago to $1.3 billion, driven by revenue growth and higher gross margin. Operating margin was 23%, compared to 24% a year ago due to higher operating expenses.

The company ended Q3 2022 with $2,466M in debt (down from $2,777M the prior quarter) and $5,591M in cash. This strong balance sheet, along with the strong cashflows, demonstrates that AMD financials are healthy and the company has successfully established itself in the investment-grade debt market (A3 by Moody’s)

On a slightly worrisome note (or a natural occurrence in the industry as explored in the following chapter) it is important to understand inventories which have gone up by over $1,5B since the same quarter last year.

If you look at Q3 in and of itself, we came in with about 50% gross margin. We had $160 million of charges, which are inventory pricing and related charges. If you adjust for those, the margin for — in Q3 is about 52%.

And we had guided to 54%. We came in at 52%. And primarily, that’s due to two reasons, right? You have the Client weak PC market. And obviously, the Client margins are down.

As I said earlier, the rest of the business will perform for the expectations. We have to work through what’s going on with the PC market over this quarter, next quarter, and maybe early ’23, and then we come back and talk about the margins. I do feel good about the products we’re introducing, especially the new products and perhaps the ability to increase margins from where we are right now, guiding 51% and then taking it up from there.

The semiconductor industry is known for its natural cyclicality, meaning that it experiences regular fluctuations in demand and supply, which has an influence on AMD financials. These fluctuations are driven by a number of factors, including shifts in consumer preferences, technological advancements, and economic conditions.

One of the key drivers of the natural cyclicality of the semiconductor industry is the constant evolution of technology. As new technologies are developed, demand for semiconductors increases, leading to a period of growth in the industry. However, as these technologies become more widespread, demand for the latest and greatest chips starts to wane, leading to a period of contraction.

Despite the natural cyclicality of the semiconductor industry, it has remained a key driver of innovation and economic growth. The constant development of new technologies and the need for ever-more powerful and efficient chips has spurred ongoing investment and research, leading to steady progress and growth in the industry. As a result, the semiconductor industry is expected to continue playing a vital role in the global economy for the foreseeable future which will be reflected in long-term AMD financials.

Design and Manufacture, China and Taiwan

AMD designs chips, while TSMC, located in Taiwan, manufactures the majority of them. TSMC is responsible for producing 90% of the world’s advanced semiconductors, making it a critical player in the global semiconductor industry.

However, China has expressed interest in bringing Taiwan back under its control, which could potentially disrupt the global supply of semiconductors. This situation is reminiscent of Operation Warp Speed, as our entire civilization relies heavily on chips and any disruptions to the supply chain could have serious consequences for AMD financials, stakeholders and the world at large. However, after Russia’s experience in Ukraine, it seems less likely that Taiwan will be invaded.

Taiwan Semiconductor Manufacturing Company (TSMC), the world’s largest contract chipmaker, is building a factory in the United States. The factory is located in Arizona, and is expected to begin production in 2024 and will focus on the production of 5-nanometer chips.

This move is seen as a response to growing concerns about the global supply chain for semiconductors, as well as increasing pressure from China. The United States has been urging TSMC to build a factory in the country for some time, and the decision to do so is being hailed as a win for the American semiconductor industry.

The new factory is expected to create thousands of jobs and generate billions of dollars in economic activity. It will also help to ensure a more stable and secure supply chain for semiconductors, which are critical components in a wide range of technology products.

Overall, TSMC’s decision to open a factory in the United States is being viewed as a positive development for the semiconductor industry and the global technology supply chain. It will help to ensure a stable and secure supply of semiconductors, while also creating jobs and driving economic growth.

With the recent development in AI, it is clear how big of an impact it can bring to the world and the amount of computing needed, thus strengthening the need for semiconductors overall. AMD financials are healthy and balance sheet a fortress. At a P/E ratio of 20 and P/FCF ratio of 30, with a strong balance sheet, stable cashflows and stellar management, AMD is fairly priced and simultaneously on track to become one of the world´s most important companies this decade.