America’s Game: What this partnership means to Palantir 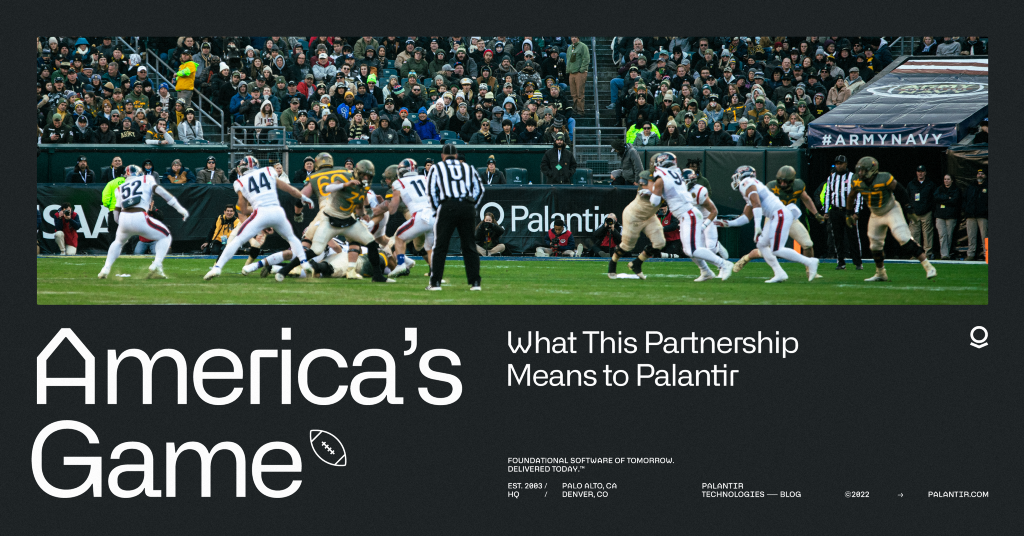 America’s Game On Saturday, December 10th, the Black Knights and the Midshipmen took to the field for 123rd time in the annual Army-Navy football game. A time-honored tradition, the game marks a moment of friendly competition between the two services; a beloved American past-time played by those united in their dedication to the country.

Palantir’s Partnership This year, Palantir had the distinct honor to be a part of the game as the Official Software partner. Palantir’s roots reside in the Defense and Intelligence communities, whose mission inspired our founding in 2003 and is still core to our culture and commitment today. Not only are we honored to be able to support the work of the U.S. military but we’re excited to be able to share in its traditions as well.

When asked why, after 120 plus years, the game still holds a unique place in the traditions of our Armed Forces, Dan Rickert, West Point Graduate ’06 and Chief of Staff, Defense at Palantir shared with Military.com , “For me, it’s the game the men on the field represent…I think the values of our country show and you don’t necessarily see that in a lot of sports, frankly. They are going to play this game and then go serve their country, and I think that’s really inspiring for a lot of people.”

Palantir is proud to have a broad Veteran community. Our decision to be the Official Software sponsor of America’s game reflects both our commitment to deploy software to those serving and to bring those who served to Palantir.

“Army-Navy is a special event for me,” noted Ben Radford, Naval Academy graduate and Product Manager at Palantir. “I was a member of the 13th Company at USNA, which has a tradition of running the game ball every year from Annapolis to the stadium. I also participated in the Service Academy Exchange Program and studied at West Point for a semester, where I made some great friends on the Army side.” He added, “The Army-Navy game is a powerful reminder of the importance of supporting our nation’s current and future leaders.”

In bringing the defense community together, the Army-Navy Game also holds weight for those who work alongside our service members. “Being a part of such a time-honored tradition, in even a small way, was a very special experience,” noted Mitchell Skiles, Senior Architect, Federal, at Palantir. “As a Palantirian, it’s impactful to see us put support behind this game — it helps represent to me at least, why we do what we do each day; for the men and women in uniform,”

Leashes of Valor For many, the game is a tradition that’s present throughout their service journey; from academy — to active duty — to Veteran. That’s why we decided to announce at the game Palantir’s partnership with the Veteran-focused charity, Leashes of Valor. Our goal was not only to support this cause with a charitable donation but to raise awareness about the role this charity plays in Veterans’ lives.

Leashes of Valor is a national nonprofit that provides highly-trained service dogs to post-9/11 Veterans to help them adjust, acclimate, and thrive in their lives after military service. Founded by veterans for veterans, Leashes of Valor is committed to enriching and improving the lives of both veterans and rescued service dogs. Palantir is proud to support those who have served across the U.S. Military and help establish better standard for excellence for veterans in need.

Conclusion Software is a uniquely American advantage. It has always been our belief and practice at Palantir to build, evolve, and deploy this distinct advantage in service of those who serve.

“I came to Palantir as a vet because I wanted to continue to be a part of an organization that had a mission-focused mentality and truly provided measurable, positive impact at a national and global scale. It’s incredible to see Palantir participate in the Army-Navy game because it signifies the connection to the defense community. “This tradition is so many things to me and my family; and although it is outwardly touted as a rivalry, I think the enduring legacy is demonstrative of the implicit kinship that two different services share.” — Sabrina Reyes-Dods, Naval Academy graduate and Site Reliability Operations Analyst at Palantir Winning the game is the pinnacle of the football experience for these young cadets and mids, and they take that winning drive forward when they serve. This is why we at Palantir strive to be America’s Software Advantage. With two decades in the Defense and Intelligence space, we build products to win and we’re honored and excited to deepen and evolve our ties to the military by supporting this hallowed event. We look forward to America’s Game, held in Boston in 2024.

Learn more about our commitment to the U.S. Army and Navy.

→ Palantir for the U.S. Navy

→ Palantir for the U.S. Army

America’s Game: What this partnership means to Palantir was originally published in Palantir Blog on Medium, where people are continuing the conversation by highlighting and responding to this story.